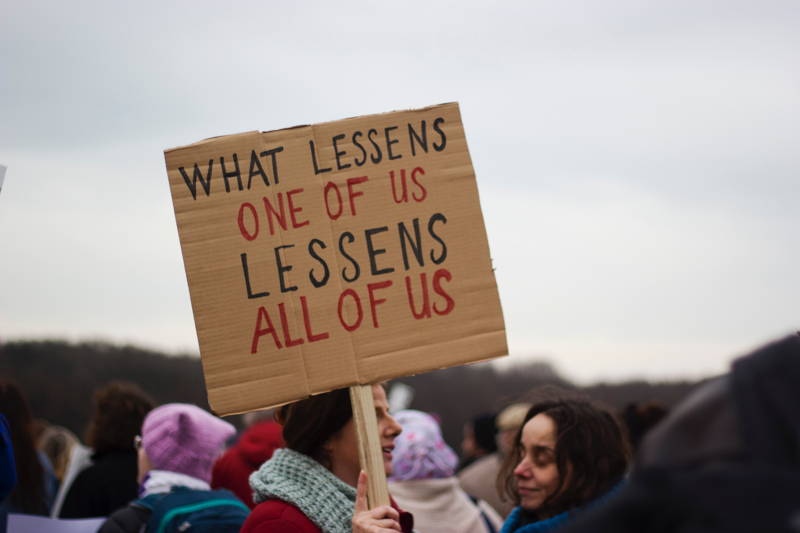 Discussing politics at work is like talking about your relationship status with relatives at Thanksgiving—it can get heated, it can be uncomfortable, and it can make you wish you could hold your tongue and be invisible.

But during an election cycle, it’s not always possible to steer clear of the topic since it’s so important and, well, plastered all over every news channel. If politics come up in the office, keep the conversation friendly, lighthearted, and free of controversial issues dealing with morals or religion. Just know when it’s time to change the subject or remove yourself from the situation.

Here’s everything you need to know about talking politics at work, FAQ style:

Can I take time off to protest or go to a rally? How?

This is a complicated question. The simplest answer is that it all depends on your boss and location. While in most states you can’t be fired because of your (legal) political activity outside work, taking off time to go to a protest or rally is different. You don’t have to disclose to your boss why you’re taking time off, but don’t lie and concoct a cover up story. You can be honest with your boss about why you’re asking for time off if you want—if they see pictures of you at a rally or protest later, your behavior could be interpreted as shady.

It’s also important to keep in mind that your employer might think of you differently because of your request. Any good boss would understand that politics are an extremely important aspect of workers’ lives, but it’s always a gamble. If you’re willing to risk it, ask for your boss’ opinion in a professional, polite manner. You can say, Hi Sheri, I’m planning onon Friday. There’s a protest downtown scheduled in the afternoon, and I was hoping to attend. I’ll be available all day with the exception of 2 to 4 p.m. Would that be okay?

There’s a chance your boss might say, I’d really you rather not go to a protest during working hours. It’s up to you how to handle that disapproval. If you’re worried your job could be at risk if you defy their wishes, it might be best to skip this protest, but it’s still within your right to exercise your freedom of speech. Regardless of what you discuss with your boss, you shouldn’t wear company-related attire to a protest, and it’s best to avoid being interviewed or on camera if you’re worried about how this will impact you at work.

The debate was last night. Can I talk about it?

During election season, especially a presidential election, it’s hard to avoid political talk. It’s definitely possible to have a calm, mature discussion about a debate to hear others’ perspectives. If you’re the one bringing it up, keep your questions neutral and your responses positive. Okay questions:

If the discussion starts to meander into iffy territory like stances on social issues, you can simply say, Interesting point. I’ve got to get back to work on this deadline, but I’d love to hear your opinions after work sometime. Signal it’s time to hop back on the grind without discounting their opinions.

What should I do if a coworker talks about politics and it makes me uncomfortable?

Having a diverse team is great for productivity and performance, but it also means your team might have a diverse array of political beliefs. If your coworker starts to talk about politics and it’s making you uncomfortable, keep your cool and remain open-minded—everyone is entitled to their own opinion.

If their dialogue is preventing you from staying on top of your work, you can respond, Hey Will, it’s super cool that you’re so passionate about this topic, but if we keep talking about this, my overactive brain will never be able to focus on the work I need to get done today. Bring attention to the distracting aspect of political talk without making it political.

Someone asked me who I voted for—should I answer?

Your best bet is always to keep who you’re voting for to yourself—it’s always better to be safe than sorry. Chances are, your coworker is genuinely curious and isn’t trying to provoke you into explaining away your entire set of political beliefs. But if you divulge that who you’re voting for is the opponent of who they’re voting for, things can get awkward, fast.

It’s easy to divert this question to keep things friendly. If it’s still an early voting period, say, You know, I haven’t actually made up my mind yet. Still weighing the pros and cons! If it’s after a primary, and you can’t deflect with saying you’re still unsure, you can use a lighthearted joke, I don’t really feel comfortable sharing that information at work. You’re one of my favorite coworkers, and I want to keep it that way!

What do I do if we talk politics…and things get weird?

No one wants to have a screaming match with their coworkers about who to vote for. Banning political discussions in the workplace is illegal under the National Labor Relations Act, so it’s hard to prevent the banter from beginning if your coworkers are passionate about the political scene. When there are conflicting opinions within a team, an accidental offensive remark can turn a seemingly innocuous conversation into a full-blown character attack. Some things are never okay to discuss in a work environment—racism, sexism…basically all the isms.

If things start to get weird, take the initiative to stop the conversation in its tracks. You can say, Y’all, I love that we’re so diverse and have so many different opinions—it’s what makes our team great! But for the sake of staying on top of our to-do lists and projects, I think we should try to get back to work now and save this discussion for later. If the conversation doesn’t end and becomes hostile or threatening, you can take the issue up with HR.

My coworker keeps showing inappropriate videos and memes of different candidates in the office. Help?

In the age of social media, there’s definitely no shortage of political memes and mocking videos. While some of us shamelessly scroll through them at home, the office is not the place to share these memes. Not everyone has the same political views, and not everyone has the same sense of humor. What might make one person cackle might make another person extremely anxious and uncomfortable.

No matter how much you want to explode and tell your coworker to stop, keep the peace. You can ask them directly to stop sharing memes with you or if you’re uncomfortable with confrontation, you can say, You certainly have a great laugh, but I’m struggling to get my work done over here. Mind breaking out your new airpods if you want to continue watching those videos? Or, remove yourself from the situation completely and say, I think I’ve had my fix of memes for the day. I’m gonna go grab a cup of coffee, do you want anything? If it’s consistently a problem, go to your boss (without naming names).

Keep it real, and keep it interesting. There are tons of other things to talk about besides politics: pets, favorite new recipes, vacation plans, Netflix shows you’re bingeing, books you can’t put down, team building activity ideas, funny stories from childhood, etc. The list is endless!

It’s casual Friday, and my coworker walked in wearing a ‘Vote for’ T-shirt today. I feel uncomfortable. Can I say something?

Consult your office’s dress code. If it explicitly outlines that you can’t wear attire (including buttons, hats, etc.) reflecting political beliefs at work, you could bring it up to HR.

If you don’t have a dress code, you can take your coworker aside and politely say, I love your personal style, but I feel like the office isn’t the best place to sport around this T-shirt. I just wanted to bring it up before our boss said anything!