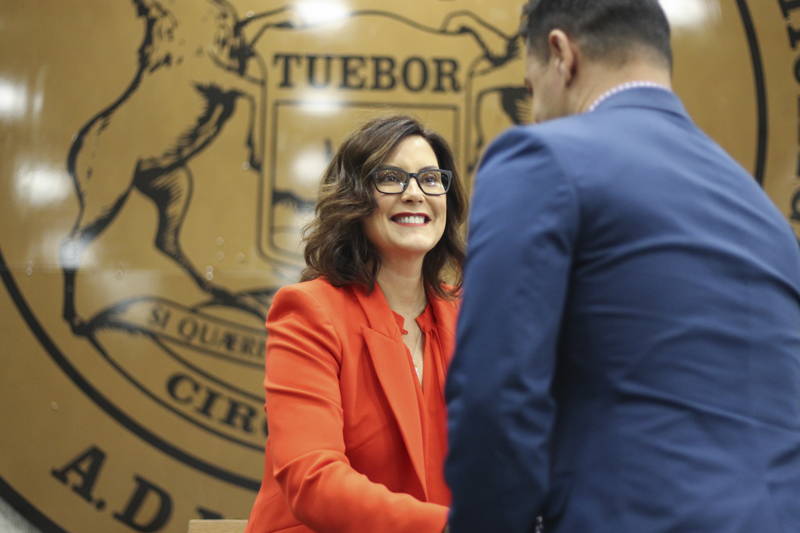 Gov. Gretchen Whitmer at a Naturalization Ceremony in Detroit 2019. Photo courtesy of

The last queen of Hawaii was Liliuokalani, and although the story of how her throne was taken ties directly to imperialism and the islands’ annexation into the United States, one legacy of her political life stands out amid the coronavirus crisis: When Hawaii was hit with a smallpox epidemic in 1881, Liliuokalani, then acting as regent for her brother, had to move fast, as Hawaiians had no inborn immunity to the highly contagious disease. Despite protests from sugar growers, Liliuokalani shut down all ports, enforced a mandatory quarantine until the outbreak was contained, and restricted travel between islands.

Three hundred people died, but none were outside the original outbreak area, which was Honolulu. There is no question Liliuokalani’s decisive and steadfast actions saved lives.

We love a woman who can stand her grown during a health crisis—or at least, now we’re learning to.

If the current pandemic has taught us anything, it’s that women can lead, and we can lead in perilous circumstances. Women politicians like Liliuokalani are in our news feeds every day: In Germany, Angela Merkel has shown us how a no-nonsense approach to leadership can rally and unite the people, and in New Zealand, Jacinda Ardern’s early actions—she enforced self-isolation when the country had just six cases—has spared the island the same fates as Italy and Spain.

Here in the U.S., women politicians are stepping up to protect their cities, states, and constituents as well. These are four American politicians leading our country through the coronavirus crisis in brave, strategic, and even fun ways.

How has the Bay Area avoided the crises of comparable metropolises like Detroit and Washington, D.C.? Mayor London Breed, that’s how. Although the city began monitoring coronavirus in December 2019, the 45-year-old declared San Francisco to be in a state of emergency in late February, before the city even had a single confirmed case. She banned gatherings of 1,000 or more just two weeks later. Almost immediately after that, she ordered businesses closed and issued a citywide shelter-in-place order. Critics deemed her moves aggressive, but hindsight proves they were prescient. On April 10, San Francisco recorded 857 cases and 13 deaths total due to coronavirus. What’s more, Bay Area hospitals haven’t yet been overwhelmed by coronavirus patients, which, Breed told , is the worst-case scenario that sparked her early actions after seeing photos from the outbreak in Wuhan, China, earlier this year.

Maybe Lori Lightfoot, the 56th and current mayor of Chicago, didn’t choose to become a meme, but the way she’s embraced her newfound meme-dom amid the coronavirus crisis is a credit to her leadership capabilities. In mid-March, when Chicagoans largely ignored the statewide stay-at-home order issued by Illinois Gov. J.B. Pritzker, Lightfoot took swift action, closing the city’s popular lakefront path, which includes parks, tourist attractions, beaches, and the 606 trail. Lightfoot’s grim and stern demeanor in enforcing the Windy City’s quarantine quickly became a meme, and the mayor’s image could be found cropped into famous locations such as Millennium Park, Michigan Avenue, and, beyond Chicago, Leonardo da Vinci’s “The Last Supper.” All of the memes reinforce Lightfoot’s repeated message—“stay home, save lives”—but with a few expletives woven in every now and again. The mayor’s response? She’s leaned into the humor, releasing a video of herself camped out at home and even retweeting memes that say things like, “Your jump shot is always gonna be weak. Stay out of the parks.” Laughter, even in crisis, is contagious.

A joke among supporters of Massachusetts Sen. Elizabeth Warren is that she has a plan for everything…and maybe she does? The former presidential hopeful has worked with California Rep. Ro Khanna to develop an “Essential Workers Bill of Rights” aimed at protecting employees on the frontlines of the pandemic. Regardless of your politics, there are some things on which we can all agree: Health and safety precautions, paid sick leave, adequate pay for putting your life on the line, and child care support are vital to supporting employees who have no choice but to go into work. The bill of rights also includes protections for employees not “classified” accurately by their employer and accountability standards. Sneaky, sneaky.